LITTLE DID YOU KNOW Interview with David McGillivrey 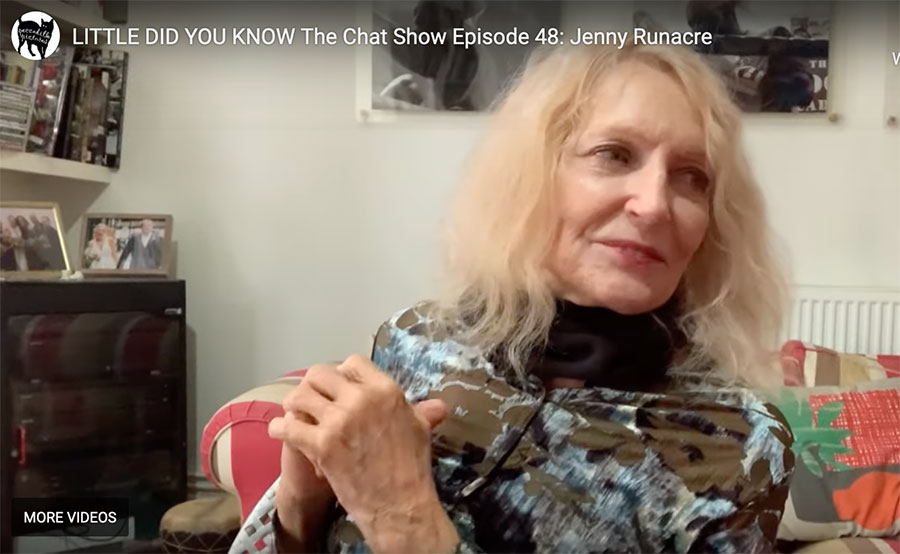 The great Jenny Runacre said a tentative yes to being this week’s guest, but she didn’t want to be asked the same old questions. Hmmm. Finding something new to ask was a challenge because Jenny has worked with some of the greatest directors in Europe – among them Antonioni, Pasolini and Derek Jarman – and I wanted to know what those experiences were like!

But I did my best to a spin on the proceedings. I reckoned she’d never been asked questions about a horror comedy called “Son of Dracula”(1973), which I described as “a monumental cock-up conceived by rock musicians with more money than sense.” (It was never released). But oh yes, she’s been asked about that as well.

Jenny has a gap in her CV between 1995 and 2008 because she went to Central St Martins and did an art degree. She’s loved art since childhood and has been associated with art projects for most of her career. She’s been involved in some way with most of Andrew Logan’s “Alternative Miss World” contests and is in the film of the 1980 contest held on London’s Clapham Common. Plus I once went to see Jenny sitting in a plastic box for a Peter Greenaway project.

Life went on almost as usual for Jenny during lockdown. She was flown off to Italy to take part in a Gucci show directed by Gus van Sant! Only on Patreon Jenny talks about witnessing The Sex Pistols’ last gig in Huddersfield (she was supposed to be interviewing them for Andy Warhol) and taking part in the play “The Ghost Train Doesn’t Stop Here Any More”, co-written by the most popular guest on LDYK (more than 1000 views) – Kim Newman!

Are you a Patreon member yet? Members get exclusive content, free signed copies of McG’s shocking autobiography, plus free DVDs, magazines and other goodies. More freebies will be added every month throughout 2021. Rare videos, some unseen anywhere else in the world, are added each week! Become a member: https://www.patreon.com/ldykchatshow​​​​ #LittleDidYouKnow​​​ Little Did You Know moves exclusively to Patreon on 6th December! NB! Jenny stepped into the breach this week, replacing Ian Freeman, who is indisposed. Get well soon, Ian, and break a leg for this year’s Royal Variety Show!